After finishing the upper wing quite fast, I chose to continue with the fuselage. On the one hand, because I didn’t have enought material left to build the lower wing, but on the other hand, because I never had scratch-built a wooden fuselage before. Hence, this should become my next test of my endurance.

END_OF_DOCUMENT_TOKEN_TO_BE_REPLACED

As I have already mentioned in my post on powering my porter loco with Li-Ion accus, I’d like to experiment with the DelTang system. There’s a lot of positive feedback from other model railroaders and all my requirements seem to be met – with further room for improvements.

Unfortunately, with the upcoming Brexit the demand for DelTang components has skyrocketed at the moment (meaining autumn 2019). I was lucky to get my hands on one Tx22 transmitter and two Rx65c receivers. It will suffice for the moment, but I will need further components, especially spares.

END_OF_DOCUMENT_TOKEN_TO_BE_REPLACED

About half a year after I started flying with my EasyGlider the desire for another model aircraft grew stronger.

I soon realized that I’d have to build my own models rather than buy premade ones. Especially larger models would quickly overtax my financial abilities. However, scratch building can consume a lot of money, too. So I decided to test my will: Do I really want to build a model aircraft from scratch?

Thus an old cardboard filled with balsa wood was ravaged, following the old saying: it only costs time. Taking stock, I realized that the materials wouldn’t quite suffice to build a whole plane. However, it would suffice to put my endurance under proper scrutiny.

END_OF_DOCUMENT_TOKEN_TO_BE_REPLACED

Why do I always notice such things afterwards? There I was, building the smoke saddle with trouble and care, brazing the bracket to the frame, attaching crossbeams… and then the bracket is misplaced and the whole saddle sits lopsided on the frame! -___- END_OF_DOCUMENT_TOKEN_TO_BE_REPLACED 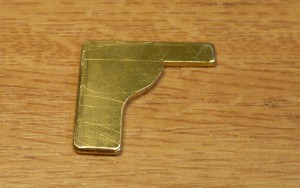 got some progress and some pictures!
I started constructing the smokebox saddle. Since I own neither a lathe nor a milling machine I’m trying to make virtues out of necessities and hone my manual skills. The first step was to make a gauge for the saddle’s curves, so I could construct two symmetrical and identical parts. END_OF_DOCUMENT_TOKEN_TO_BE_REPLACED

here’s what happened the last few days.
First off, I constructed a simple tablet-like working space, so I can work on small parts in the living room without having to clean up everything afterwards. In the future I will saw new parts in the workshop, then take the half-finished parts and the fine tools to the living room, combining the best of both worlds, so to speak. END_OF_DOCUMENT_TOKEN_TO_BE_REPLACED 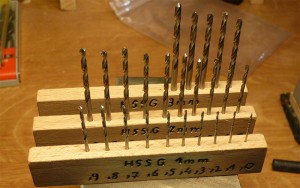 it’s 8 am, thunderstorms are rolling in after a week of intense heat (thermometer topped at 110 °F) and I can finally spare some minutes to keep you updated.

Last week I ordered a whole set of small drills, so far I had a very limited stock. Now my options are quite unlimited when it comes to making threads and clearance holes. I spent some time in the shop building a neat set of holders. END_OF_DOCUMENT_TOKEN_TO_BE_REPLACED

Filing down the axle’s diameter

reshaping the cylinders is taking some time, pictures will follow. In the meantime, I could actually spent some time at the workshop.
I don’t own a lathe, so I took on the trailing wheel with a file and a plan: since this particular wheelset can’t be disassembled, I’m trying to build a vice-like bearing. I aimed for reducing the axis’ diameter from 5 mm down to 3.5 mm with a 1/10th mm tolerance (that’s 1/256th inch). END_OF_DOCUMENT_TOKEN_TO_BE_REPLACED