As I’ve already written in my post concerning the removal of my garden railway, I got hopelessly lost during the last years both from a financially and contentwise.

Today I’d like to explain to you the consequence I’ve drawn. In one word, it is:

It’s almost a widespread disease amongst model railway enthusiasts to be overly ambitious. I get it, I’ve been there most of my life. And whenever I tried to do something small (for instance a micro-layout), it got under the proverbial wheels of some other high-hoping major project.

Why do I do this to myself? One hast to find the answer for oneself. Concerning me, it seems to be a mixture of being enthusiastic and… let’s say weakness in character: I’m great at starting things. I’m not quite so good at bringing them to an end before starting something else. The garden railway definitely suffered from that, plus all those additional wishes as I described them in the post linked above. 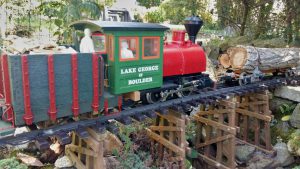 However I noticed that some external limits can help me a lot. Most recent example: My porter loco had to get ready for operations before the visit at my parents’. All of a sudden, it was no issue to finish the paint job on the boiler and reinstall the original buffer bar, although I really find it quite ugly. In the end I had some very nice runs, even though driver and stoker hadn’t been painted. It simply didn’t bother me any more!

So what to learn for my model railroading?

It suffices to build a beautiful loco and having fun running it. It is enough to calmly construct rolling stock until I’ve got a nice short train for the loco.

It suffices to lay some snap track in the garden for some quick sessions. It may even be okay to construct some small modular segments with fixed track, placed with ground anchors in the garden: fast setup, nice operation, fast dismantle, save storage.

So in the months, or perhaps years to come, I’d like to grow my rolling stock, until I’ve got one(!) coherent train-set finished. That will be early enough to make further plans. Fortunately, I’m still certain about the theme: early 20th century, fictional U.S. shortline. That has fascinated my since childhood, I’ll stick to it.

Focus on the Essentials

At any rate I will give up any plans for my own garden railway, at least for medium terms. Instead, I’d like to run my train on snap track, at the outmost on some simple, mobile layout modules. What I’d really like to do is visit friends and run my train on their layouts. Having sessions with several trains is always a lot of fun for which you need several persons and a layout. One layout per person is not necessary.

To me it will mean to get free in multiple ways: I can use my limit financial assets for the cheapest aspect of model railroading, the rolling stock. I won’t have to spend time on constructions and maintenance in my own garden, while I lack the time and money to do it properly. I will find more opportunities to visit friends that I seldom see – and it will mean fixed deadlines for things to get done.