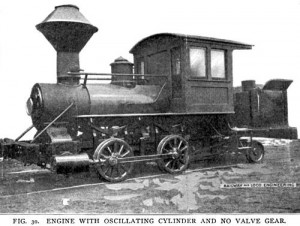 Since I stumbled on a picture of a Dewey Bros. 0-4-2T, I’ve fallen in love with this little engine. My first encounter happened during a Google picture search for industrial steam locomotives.
This particular image came from a book written by Angus Sinclair in 1907: Development of the locomotive engine, where it served as an example for oddities of engineering history. Several universities offer free online access to the book.

As it turned out, information is scarce on the Dewey Bros. Locomotives with oscillating cylinders. I kicked off with an extensive Google Image search, followed up with a Google Web search. All these efforts only earned me a total of three images and several posts on forums where people asked questions on the Dewey Locos but didn’t receive much response.

What I did find was a picture painted by australian artist Robin Barnes, who kindly allowed me to quote from his website: 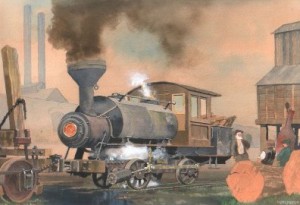 “Set up in Goldsboro, North Carolina, in 1884, Dewey Bros engaged in the manufacture and repair of machinery for the cotton and lumber industries. Also, between about 1898 and 1928, it produced somewhere around eighty small locomotives for industrial use, of which those built up to 1906 featured oscillating cylinders, common enough in stationary and marine applications (and on early, live steam toy locomotives), but for full scale railway operation, rarer than rare. This is Dewey maker’s number 150 of 1902, 3 ft gauge, supplied to the Mullen Lumber & Brick Company. Whatever else, the arrangement had the virtue of extreme simplicity.”

The article contains 3 pictures of Dewey Bros. locos, one of which is an Oscillator and the inspiration to Mr. Barnes’ painting. It also contains some very interesting facts on the company, derived from interviews with one of the owners’ sons and there is even a detailed list of the Dewey Bros. locomotives that were produced since 1898. Oscillators were numbered 10 to 350 in intervals of 10, most of them went to lumber and mill companies, one (No. 150) was sold to a brick yard. There are no records on 330 and 340, which most likely were not built. Numbers 0 to 70 show no record, so these qualify best for freelancing. Oscillating locomotives were built for 3ft narrow gauge and standard gauge. Most were 0-4-0 saddle tanks, followed by some 0-4-2T, even fewer 2-4-2Ts and at least one 0-4-0 with a tender.

In 1913, Dewey Bros. switched to the production of geared locomotives, you can find lots of information on those at www.gearedsteam.com/dewey/dewey.htm
Dewey Brothers finally ceased production of locomotives between 1926 and 1928 since the lines grew bigger and the owners demanded stronger locomotives. The company focused on its other production lines and survived until the 1970’s. 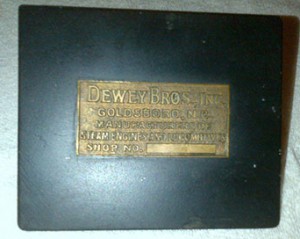 The last picture I could unearth shows the boiler plate of a Dewey Bros. locomotive. I hope I’ll be able to make my own plate based on this photograph. There’s also a photograph of what’s left of the company.

This is about all that I could find on the Dewey Brothers Company. However, Mr. Barnes discovered a second American Company which built locomotives with oscillating cylinders: Filer & Stowell of Milwaukee. There is a very interesting article in the Model Railroader No. 43, including three photographs of an 0-6-0, (probably) a 2-6-0, and an 0-4-0, all of them with tenders. What’s more important, the article shows several 3-sided diagrams of the 0-6-0, detailed enough to build a scale model, a 2-sided diagram of the 0-4-0 and a diagram of the cylinders’ interior.
Again, since I don’t want to violate copyrights, you can find and purchase the article at:
Odegard, Gordon: Filer & Stowell logging locomotives, in: Model Railroader No. 43 (May, 1976), pp. 46-49.

As you can see, I’m stuck with a single photograph on my actual prototype. Nevertheless, I could collect some solid background information and the diagrams on the Filer & Stowell engines are quite helpful. They have already influenced my second sketch to some extent and I will certainly use them whenever I’m lost on technical details that can’t be answered by the two available photos.

One thought on “Historic Researches on Dewey Bros. Loco”