Since last September I’ve worked on a project, which I’d like to present now. It’s about a small Portor steam locomotive by LGB, which I want to switch over to battery that is accumulator power, controlled by R/C. At a later time I’d also like to adapt the looks. 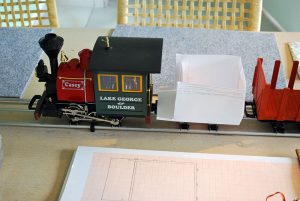 Tender Mockup made of paper

This loco is supposed to make the starting point for my own garden railway, hopefully within this year. September and October were spent with some experiments to place all the necessary components within the locomotive. Alas, I had to take away too much of the lead ballast, so the loco wasn’t able to transmit its motive power to the rails.

Hence a seconed try, this time with a tender. The tender will house all electronics and the batteries, the locomotive keeps its ballast and will be fed by wire. 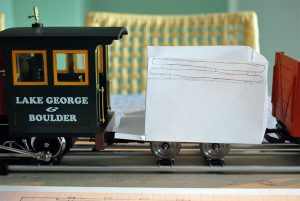 The  technical prinicple was derived from Thomas Hey’l’s very nice concept for Locomotives with battery power (external link): Two accumulators from a camera in series circuit, controlled by 40 MHz-R/C. Of course, there are even smaller systems available with 2.7 GHz technology, but I had the components available and they can be replaced at a later time.

First of all I wanted to get an idea of the possible dimensions of the tender: Just how big can it be without looking too massive? So, I took a scissors and made a mockup in order to get harmonic dimensions. Some small corrections, and the basic outlines were clear. 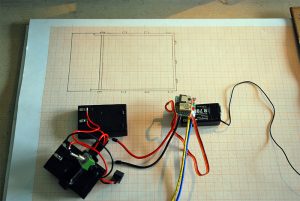 Meanwhile it had to be checked just how much volume the tender would offer, for the components would have to be kept safe from the weather and at the same time the model shouldn’t be disturbed by wires, switches and the like. Quickly it became clear that I would have to disguise the wires. A water feed from the tender to the loco was no option due to the Porter’s design, the saddle tank provides enough water as it is. In the end, it will probably be air braking hoses.

With these preliminary steps taken, the road was clear and the blueprints could be started.