Since my porter is serving as a working horse in the vicinity of a logging railroad, she’s burning wood, as one might tell by her tender. The original smokestack has only got a small diamond spark arrestor which doesn’t really fit to a wood burning loco.

That’s why I’d like to build a new smokestack for the loco and attach a bigger spark arrestor to it. Now, here’s the thing: why not try and put a scratch-built, pulsed smoke generator into the spark arrestor? I’ve done something similar with a WP&Y diesel loco at my father’s layout. The results were impressive, however the steam generator had to be placed inside the loco’s engine housing and the fittings never quite sealed. That issue could be circumvented neatly with a vaporizer built into the spark arrestor. It would also spare me the need to make room within the boiler which would inevitably mean to sacrifice lead ballast. 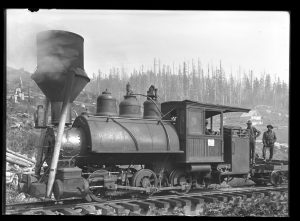 During a quick online research I happened on the alongside picture. And all I can say is: a brute of a spark arrestor! If I constructed something similar for my porter, I’d have more than enough space, even for a pulsed smoke generator. What I like particularly about this design is the combination of a big diamond smokestack and the cinder pipes, which I’ve come to know from the Colorado & Southern’s spark arrestors. On top of that the loco’s obviously a wood-burner. Thus I’ve decided on a design for my new smokestack. The only question remains where and how the needed parts can be fit in. However, this will be easiest to determine with the help of a prototype made of paper or clapboard.