My faithful Porter had some work to do during this winter, for which it was transported to different places: Into the garden, at my parents-in-law’s, even at work. Of course, these transports always entail boxing and unboxing into transport crates, which lead to considerable wear regarding the coupling between loco and tender on the one hand, and the conductor’s platform at the tender’s rear end on the other hand. Thus, we’re going to focus today on ever-occuring maintenance and possible improvements.

Locomotive and tender are coupled with a classic link and pin, which is secured by bolts. The latter tended to get lost, until I couldn’t find them again. Since loco and tender are not supposed to get uncoupled during normal operation, I’ve replaced the bolt on the loco’s side with an M2 threaded rod made from brass. I filed down the threads in the middle section in order to protect the link iron, which is only made of casted tin. The nuts were secured with CA superglue, instead of soldering them in place – thus the nuts can be unscrewed, if need be.

The loco’s side is secured with a threaded rod.

The tender’s side has got a bolt made from steel wire, bent at right angles at the bottom in order to keep it from sliding out. Now the tender can be uncoupled for maintenance, which makes it easier to handle, but during normal operation there is a rock-solid coupling. 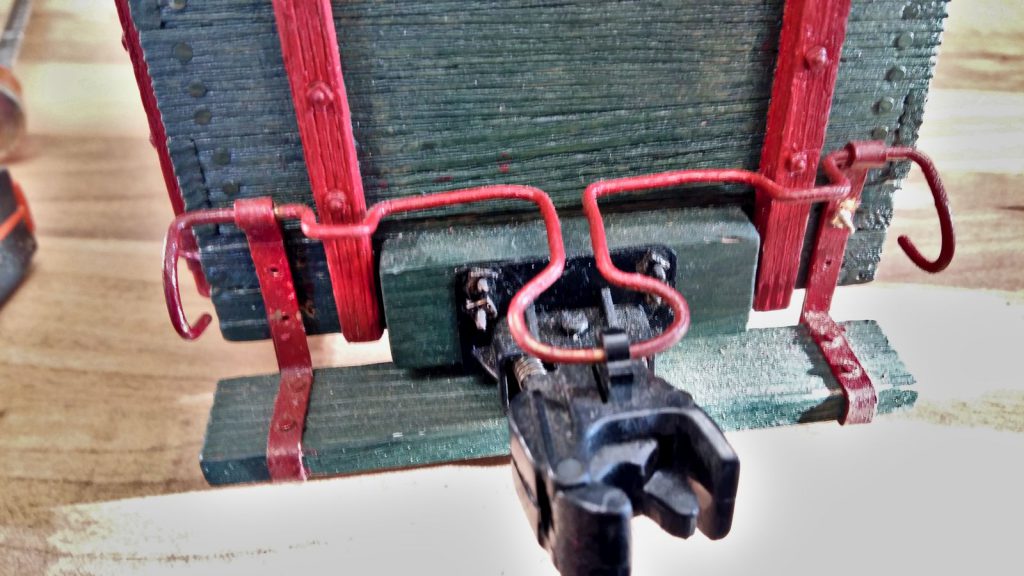 After that the conductor’s platform was up next. Originally, I secured it with small nails, but those came loose every now and then. The reason being, that the knuckle coupler is operated with a cut lever, which allows prototypical operation

In order to improve stability, I once again chose threaded rods made from brass, however this time I used a diameter of one millimetre because the holes drilled in the platform’s fittings were drilled with one millimetre in diameter. Besides, it gave me the opportunity to once again use my selfmade four-sided nuts. 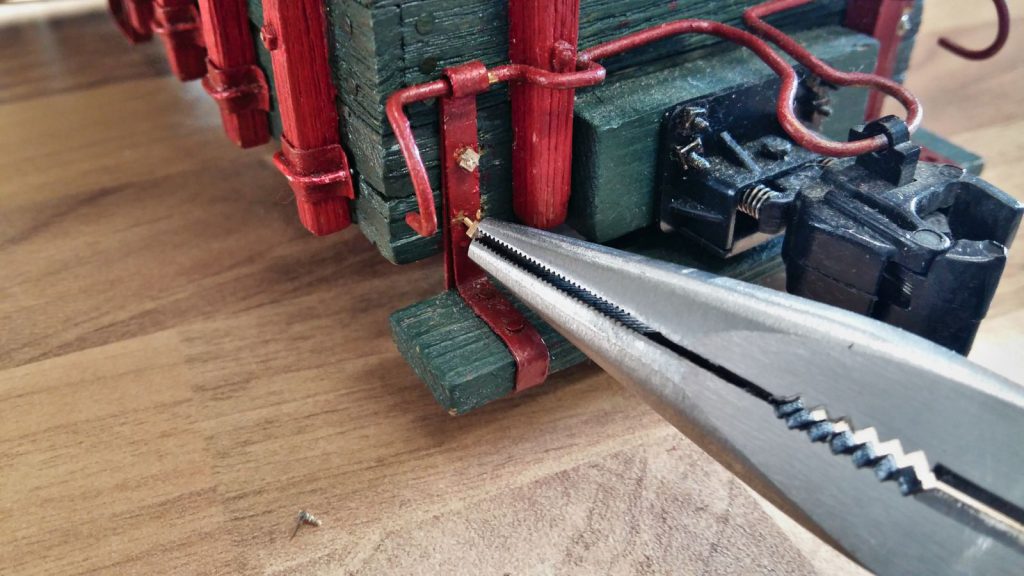 Threaded rods are screwed into the wood.

The threaded rods were quite informally screwed into the wood, which was no strain at all due to the holes left over by the nails. In future, when it comes to such small diameters, I will always “drill” with small nails and the screw in the threaded rod. I find it to be the more stable connection. The wood doesn’t split due to the small diameter and the undisturbed grains clamp with greater force.

The four-sided nuts were secured with CA superglue, too, in order to allow me to unscrew them if need be. In the long run, I will probably resort to soldering, since it enables me to loosen the threaded rod together with the nut as if it were a screw. For the time being, it is a rock-solid connection, finished up with some color.

To me, such episodes are as nice and gratifying as a short shunting operation. It’s just part of the normal railway life, to tinker and service. Maybe I will even build a small working board, fashioned as a workshop diorama..?